Stranded for two nights in Pula after a week-long sailing trip in the Adriatic sea (video will follow shortly), I was looking forward to explore more of the Istrian Coastline, History and Cuisine. In my entire life so far I haven’t managed to go to Croatia. After having sailed trough some of the Croatian islands including superb food and hospitality, my hopes where high for the remainder of my time in Istria.

Let me make clear that my observations do take into consideration the relatively short period of peace and stability in Croatia, and the therefore quite recent development of tourism (if you can still define 20 years as ’short period‘) and that the fourth week of August kind of marks the end of the high-high-season (whereas official tourism season will last until end of September). 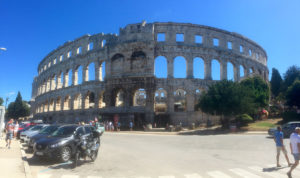 Still, Pula is quite the disapointment or even a desaster when it comes to tourism. Whereas they managed to more or less preserve their many impressive Roman ruins, such as the Arena (Amphitheater), the Arch of Sergii and the temple of Augustus, it bothers me that all these monuments are accessible day and night by everybody. Judging by the local behaviour when it comes to protecting the environment and eco-friendly living (altough Croatia ranks #15 in the worldwide ECO-report, one rank ahead of Switzerland), it will be only a matter of time until these monuments will have to pay tribute to the masses of tourists. Leaving 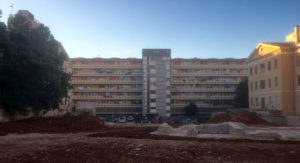 this aside, the old town as a matter of fact would be quite nice to take a stroll if they were to take better care of the houses and facades. Also they managed to hold on to some absolutely horrible buildings whithin the city that spoils every site of beauty you might encounter during your tour.

Why would any Italian in his right state of mind go to Pula for a vacation? I get that all the Germans, British, Dutch and other northern Folks without a decent summer (and yes, I include Switzerland too) go there to burn off their white skin off their bodies, but Italians? Here is probably why: Italians are culturaly deeply rooted into their history and have a tendency to visit former colonies of Rome – which of course amount to quite a number of regions. So, since Istria used to be Roman Empire, why not go there too? And the water is way clearer on this side of the Adriatic sea due to the anti-clockwise rotation of the Adriatic stream, so there you go. On top of that, Pula is bi-lingual with Italian and Croatian, so it has become to Italians what Mallorca is to Germans – theirs!

But as always, too many tourists are the root of many unpleasant side effects that will drive away any independant traveler looking for authenticity and freedom: jammed 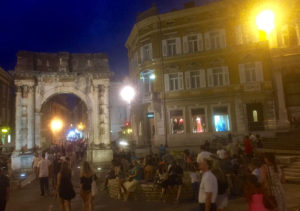 beaches, traffic, noise, polution, street hawkers, beggars including children, scam, cheap mass souvenirs, mediocre food and unmotivated people working in tourism and restaurants. Best example for this probably is the rental agency Parmula (http://parmula.com.hr – don’t click). The owner literally rolled his eyes when I asked for a scooter for the afternoon because there was another guy next to me who also waited for his scooter – too much preasure for one day, I mean – really? Since I had to bring it back until 7pm, I thought it was a good idea to be there at 6pm, just to find out that they had left for the day and only reluctantly came back after my call because my flight was early the next morning. 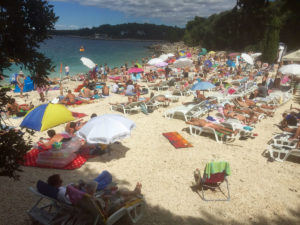 Adding to the misery is the fact that most of the coastline is rocky, not pepples or sand, therefore the majority of tourists assemble on a few beaches in Verudela – not a good idea to go there.

So what happens at night when everybody flocks back to the (very narrow streets of the) old town? Well it gets very crowded with big Italian families (strolers and toddlers included) and German all-male-with-very-bad-to no style-travel groups. Most of the restaurants dish out the exact same things: Pizza, Fish or Meat with fries. And all the dishes look exactly the same. Some kraut-salad from big jar’s, pre-cut from the store, 2 leaves of green salad, all without dressing, 2 potatoes or some fries and a uninspiring piece of fish or meat. And what shocked me the most: Pula is the only place known to me where Pizza is served with complimentary Kechup (!!!) – to Italian Tourists?? Again – why do they keep going there?

Well – in all that tourism hell springs some hope. As I chatted with a young guy who is studying tourism (since there is no other trade left to work in realistically) he complained 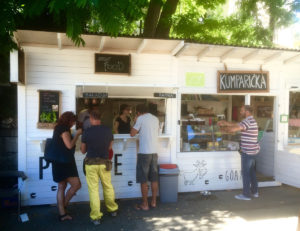 about the lazyness and uninspired approach to tourism in his country. Meaning that Croatians (his opinion, not mine) are happy with shuffeling through as many tourists as possible with as little effort as necessary. And that’s excately the feeling you get in Pula. However, there is a small movement of young enterpreneurs to make the region more appealing again. For example in the middle of the same-same fruit, vegetable and oil-market in Pula, there is a corner with Food Trucks, focusing on local specialities that suprisingly you won’t find in any of the restaurants. Or there is more and more agriculture-tourism waking up in the countryside, but of course one has to leave the coast to find them (which I would pick anytime over the mess I’ve seen at the beaches).

But then again, a lot of young Croations apparently lack the aspiring spirit found in other Mediterranean tourist-destinations and focus on quick money to spend on cigarettes, parties and booze, rather than studying tourism or any other profession that could drive the country forward.

So let’s see in the future which path Croatia and it’s people will choose.